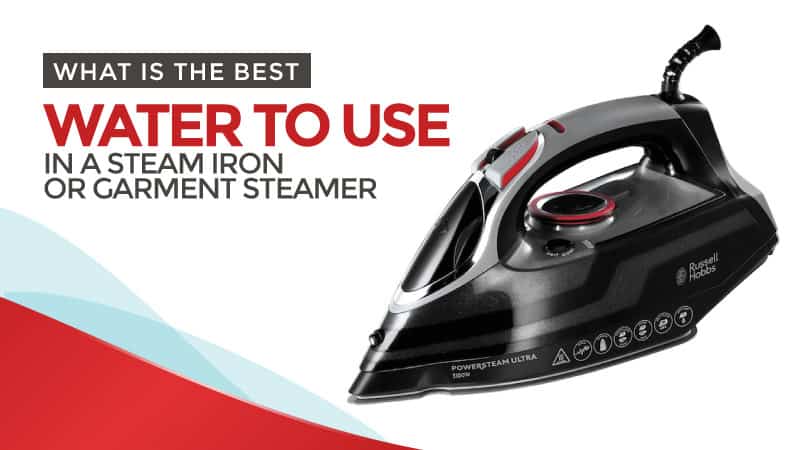 There are many truth and half-truths on the internet surrounding this topic, which is why I have put this guide together. In this guide, we briefly look at what steam iron and garment steamers are, before moving on to the type of water that can be used inside them. Detailed and factually correct, this is the guide you are looking for.

If you don't have the time to read through our guide the short answer to "what is the best water to put in my steam iron" if you live in a hard water area is a mix of 50% distilled water (pre-boiled) and 50% regular tap water. This is the general advice from most manufacturers, combined with regular calc-clean flushes to keep your iron performing to it's max

What is the best water to use in a steam iron?

If you don't have the time to read through our guide the short answer to "what is the best water to put in my steam iron" if you live in a hard water area is a mix of 50% distilled water (pre-boiled) and 50% regular tap water. This is the general advice from most manufacturers, combined with regular calc-clean flushes to keep your iron performing to it's max

Quick Navigation
Quick Answer
What is the best water to use in a steam iron?
What is a Steam Iron or Garment Steamer?
Types of Water
Tap Water
Hard Water
Distilled Water (Pure Water, De-Ionised Water)
Calc-Clean
Home Water Softeners
Bottled and other Water
Best Steam Irons for Hard Water
​Water Hardness by Region
To Conclude

What is a Steam Iron or Garment Steamer?

A steam iron is used for ironing your clothes, typically with an ironing board. It is an electric iron with a series of holes on the soleplate for the release of steam. This ensures that clothing is freshly pressed and the creases are removed. Many households own one, and they are a commonly found appliance.

A garment steamer (also known as a clothes steamer) works in a similar way, and its function is also to remove the creases and wrinkles from clothing. However, it is generally faster and also not used as commonly as a traditional iron. It also has a steam nozzle instead of a soleplate, causing the overall shape to be completely different.​

If you would like to find out more about Steam Generator Irons then Read Here.

All modern steam irons, generators, and clothes steamers are able to use tap water. Of course, this can also depend on the type of tap water that is being used. By this, we mean the hardness of the water – something which varies across the UK (very soft to very hard) depending on the region. Below, we will take a look at this and the effects that hard water can have.

Hard water typically contains a higher concentration of minerals, like calcium, which causes a build-up of limescale in steam irons over time (as well as kettles and other appliances). Over time, this reduces their overall efficiency.

In the UK, around 60% of the country is classed as having hard water, and if you live in such an area, then it is advised that you remember to follow calc-clean procedures while using the tap water normally. 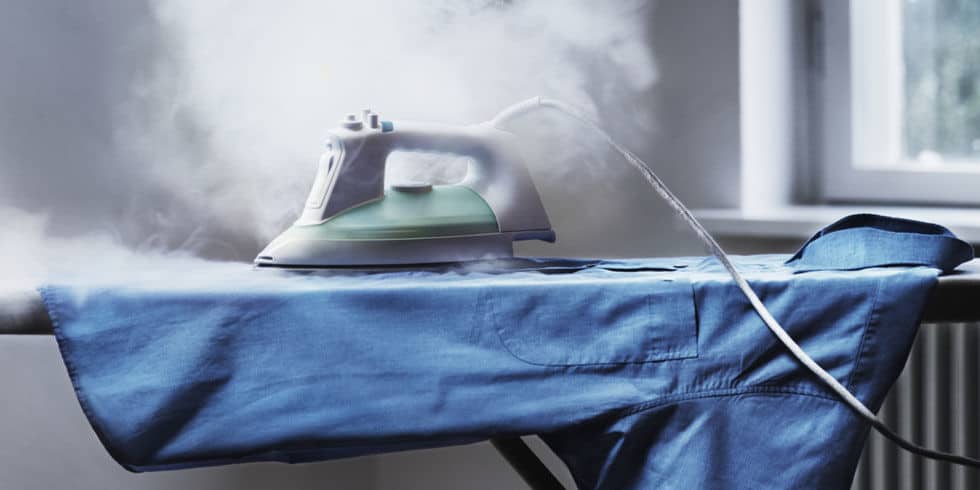 Many people on the web suggest using distilled water for steam irons and garment steamers as the impurities and minerals have been removed from this. However, they are wrong, and you should not be using it. In fact, most steam iron companies are clearly stating this in the instruction manuals as well as on their websites.

This is because it can cause the iron to split and leak. So if you plan on using distilled water, you must at least mix it 50/50 with tap water.

Most steam irons now feature a calc-clean function, which requires you to rinse out the boiler area and flush the calcium deposits away. Some of the cheaper models will use special cartridges instead which will need to be replaced regularly.

Regardless of the method that your iron uses, you should follow the cleaning instructions at regular intervals, or whenever the alert light comes on.

If you have a water softener installed in your home, then you should never use this water by itself. Although the risk of limescale is greatly reduced, there are other materials within it that could eventually clog your iron and cause splitting, as well as brown stains. You should only ever use water from a drinking tap, such as your kitchen, to keep your iron efficient and healthy. 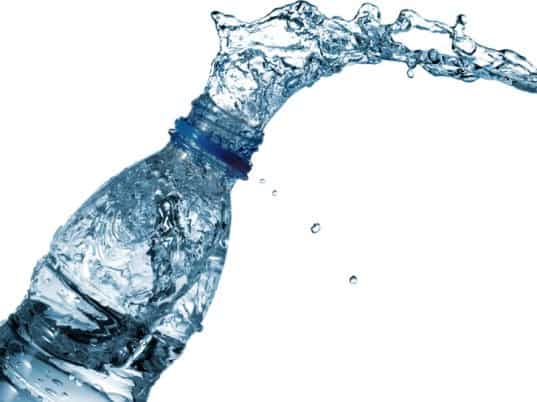 Bottled and other Water

The mineral content found in bottled water can increase over time and end up reducing the efficiency of your iron. You should also avoid ever using vinegar, perfumed water, or any liquid that contains chemicals as this can cause damage that results in clogged steam nozzles, as well as brown water spots and reduced performance overall.

If you are looking for a steam iron, garment steamer, or steam generator iron that can really handle hard water (better than others at least), then you need to look for the ones that contain a full anti-calc or calc-clean system. This will usually involve a permanent cartridge system that keeps the calcium deposits in the water tank, as long as you rinse it out on a regular basis.

​Read our guide to the find the "Best Steam Iron " here

Moderately Hard - except coastal areas where it is soft

Varies from soft in the north and east, to hard in the south and west

Hopefully, this guide has answered your questions about which water is best to use in your steam iron or garment steamer. With the internet filled with so many conflicting ideas about what you can and cannot use, it is important to have all the facts in one concise location.

Of course, if you have any questions or concerns, please feel free to leave a message for us in the comments, we love hearing from you and always appreciate your feedback.

Where to Find Us

We are a participant in the Amazon Services LLC Associates Program, an affiliate advertising program designed to provide a means for us to earn fees by linking to Amazon.com and affiliated sites.