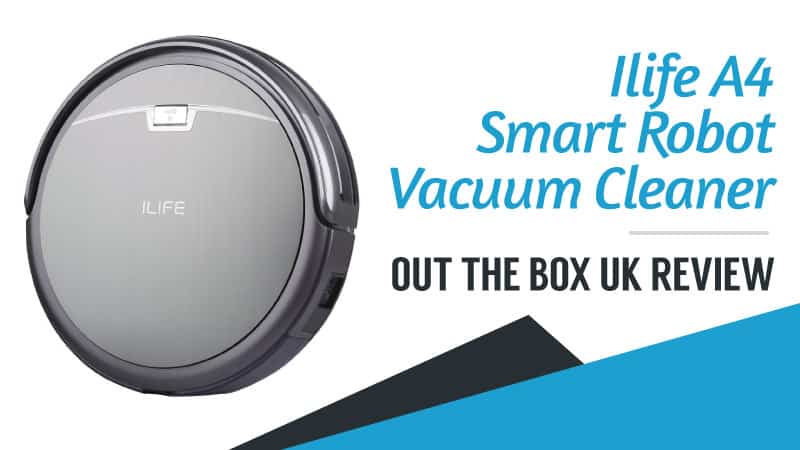 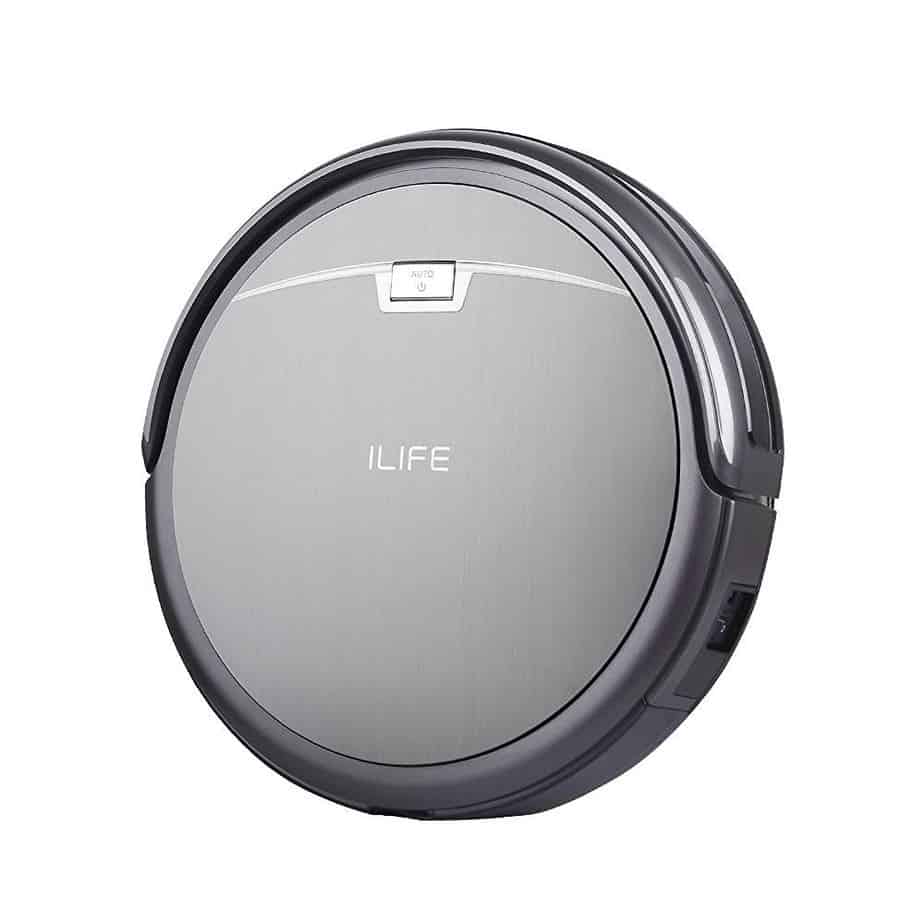 What is the ILIFE A4 Robot Vacuum cleaner?

This sleek robot vacuum cleaner from GearBest is nifty and highly affordable. It has an excellent design, and offers powerful suction on all floor types – even thick shag rugs.

Its features may appear simplistic at first, but they are actually very diverse, especially when it comes to the handy remote control. It may not have a clean as deep as a regular vacuum, but it certainly delivers.

I live in a house with a dog that sheds a lot, and this robot vacuum was definitely made to deal with the amount of hair he leaves behind. The canister may be small, but it can hold a lot of fur and it keeps the house relatively free from it.

It’s effective, efficient, and certainly one to consider for the home. Let’s take a more detailed look at this nifty device and what it has to offer.

The ILIFE A4 Robot Vacuum cleaner: Design and Features

Upon receiving this model, I was quite pleased with the overall look of the packaging. It came in a neat box with a professional design.

Once opened, I noticed that it was very well packaged, and done securely so that the vacuum did not slide around in transit. Unpacking it was a very easy task, with little to no assembly required. The instructions were very clear, and it was easy to set up ready to go.

The docking station needs to be placed in a clear area with one metre of obstacle free ground on each side (except for the back). It can then be plugged into the mains and the device set up so that it returns automatically when finished or low on charge.

I found that it did this most of the time, but there were a few instances where it became stuck and did not return. 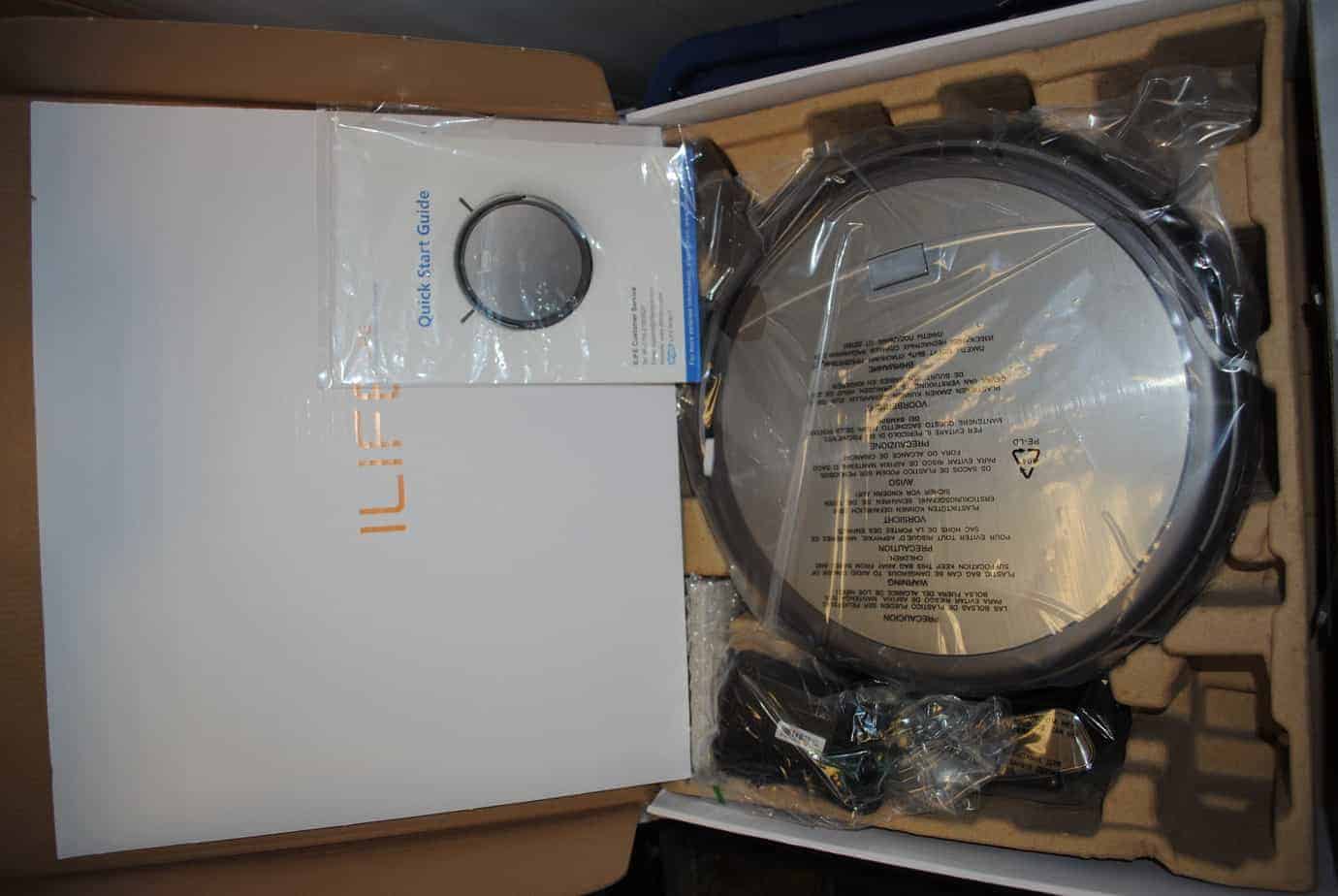 The overall design is compact and very simple. Features which I appreciate in a vacuum cleaner.

There is a single button on the top which turns the machine on and off, with the machine being controlled by the handy infrared remote control that is included.

With it you can set one of the three cleaning modes, plan a clean for a time in the day, and also set it to a higher level of suction.

When you go to set the timer for the vacuum, it may appear as though it is not functional if you don’t take note of this important step.

You must first tap the button on the top of the vacuum to power it on before pointing the remote directly at it. The vacuum cleaner must then beep several times for you to know it is working. If it does not beep, then you must do it again.

It has brushes built in to keep your hard floors clean and free from loose debris, and these will pop out automatically when required. It is able to sense when it is changing to a new floor type and will adjust itself accordingly.

It should be noted, however, that this is not a smart robot vacuum as it cannot map out the floors and does not seem to remember where it has been. However, it can be left alone to do its work with no issues. 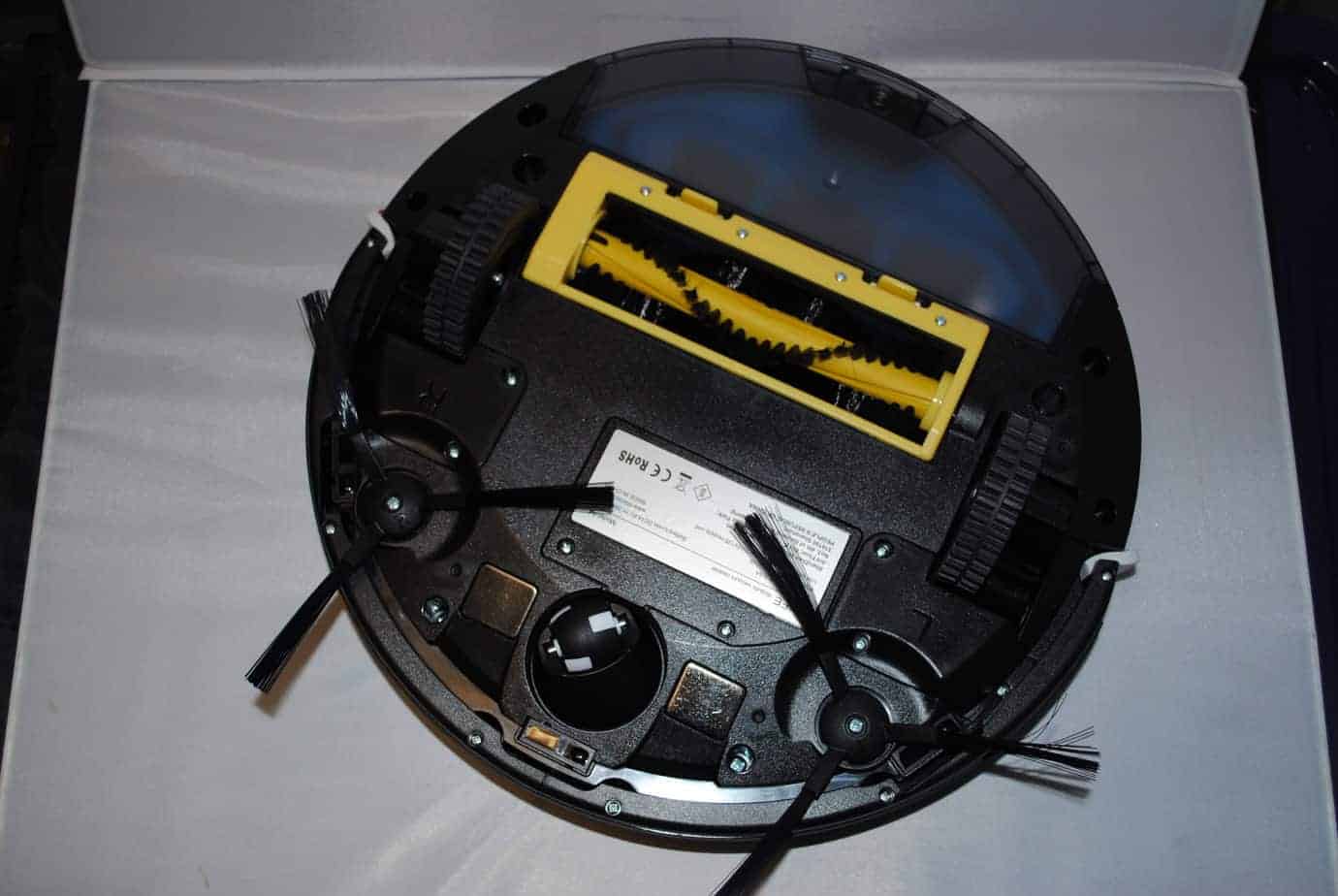 It did a surprisingly good job on my carpets, especially when it came to picking up dog hair from the carpets.

The clumps did not get stuck, and it was also able to pick up the leaves and dirt debris from the back door area.

It was even able to get under the armchairs and the couch to get some extra cleaning done – it picked up more than I expected to, especially since it has not been vacuumed under there in a long time.

It was very good at avoiding obstacles in the living room and the bedroom, stopping itself and turning around when they were encountered. However, it did not remember where they are and did come across them several times over, especially as we live in a small home.

There were also a few issues where it would focus almost obsessively on one spot of the carpet for some time – amusingly not the dirtiest parts. However, it did give the whole carpet a good clean in the end.

It was good at getting through doorways, and there were no issues with that, which was good. I was expecting it to as it cannot map out the flooring, and so it was a pleasant surprise.

The kitchen proved a slight challenge for it as the room is quite small, and so it did not get every corner. However, the brush mechanism worked excellently at removing small amounts of debris and excess dog fluff – which gets everywhere. 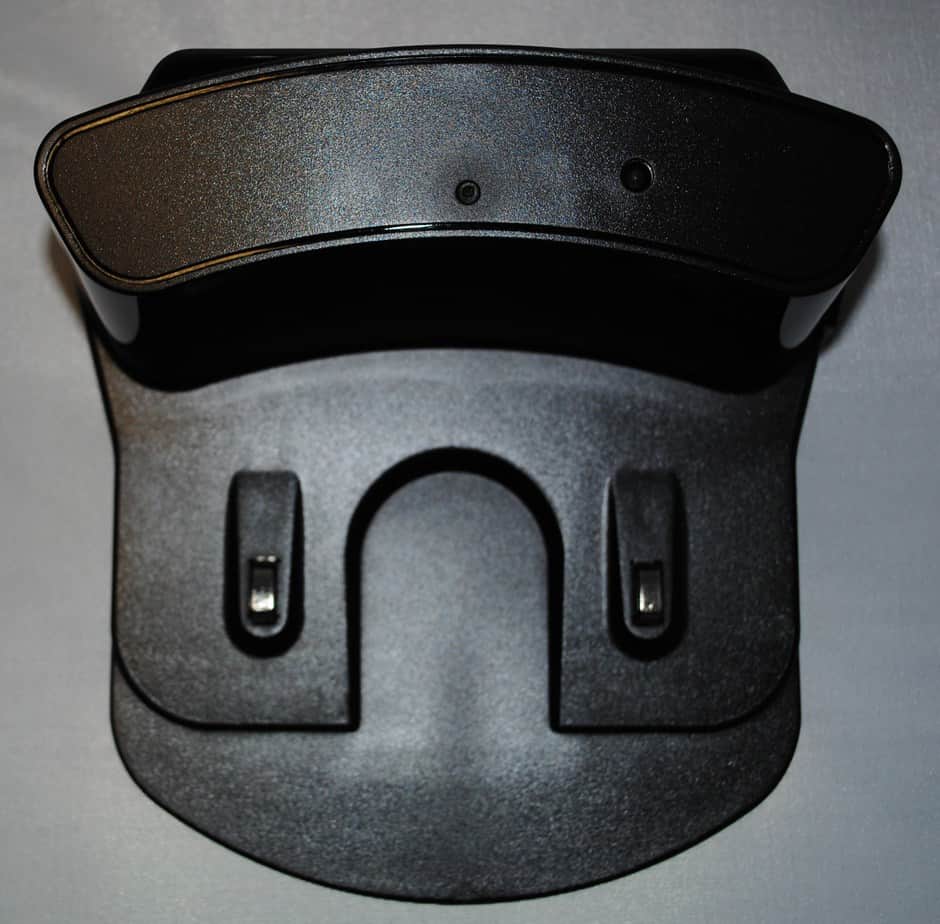 It makes an easy transition from floor type to floor type, and works effectively on all of them. I noticed that it cleaned the carpet excellently, although as it is a robot vacuum it cannot offer the deep cleans that some may want.

When tested with chunks of paper and other debris, it picked them up effectively and in one go. It was gentle yet thorough with my hard flooring, and able to pick up small chunks of debris.

When tested with large amounts of debris, such as piled flour, it spread the mess around the floor more than cleaning it up on regular suction levels.

On the more powerful setting it did a better job of cleaning it up but it did take some time and quite a few tries. Definitely not recommended for large amounts of mess on carpet or hard floors.

One thing to note is that the area should always be tidy before you use this vacuum cleaner. Cables and toys should be removed from the floor as these are not detected and they will end up eaten or dragged around.

This can result in them becoming stuck or damage to the vacuum. A neat area is essential for it to work to its full potential.

Being a robot vacuum cleaner, it cannot clean the stairs as we have sadly not made that step forward in technology.

However, it does have an excellent sensor that lets it know the stairs are there and it will turn around promptly – much like its obstacle and wall detection. It was also able to detect the small step down from my living room to the kitchen, which was a relief as for a moment I thought it would fall. The step detector is very strong.

The ILIFE A4 Robot Vacuum cleaner: Should You Buy It? 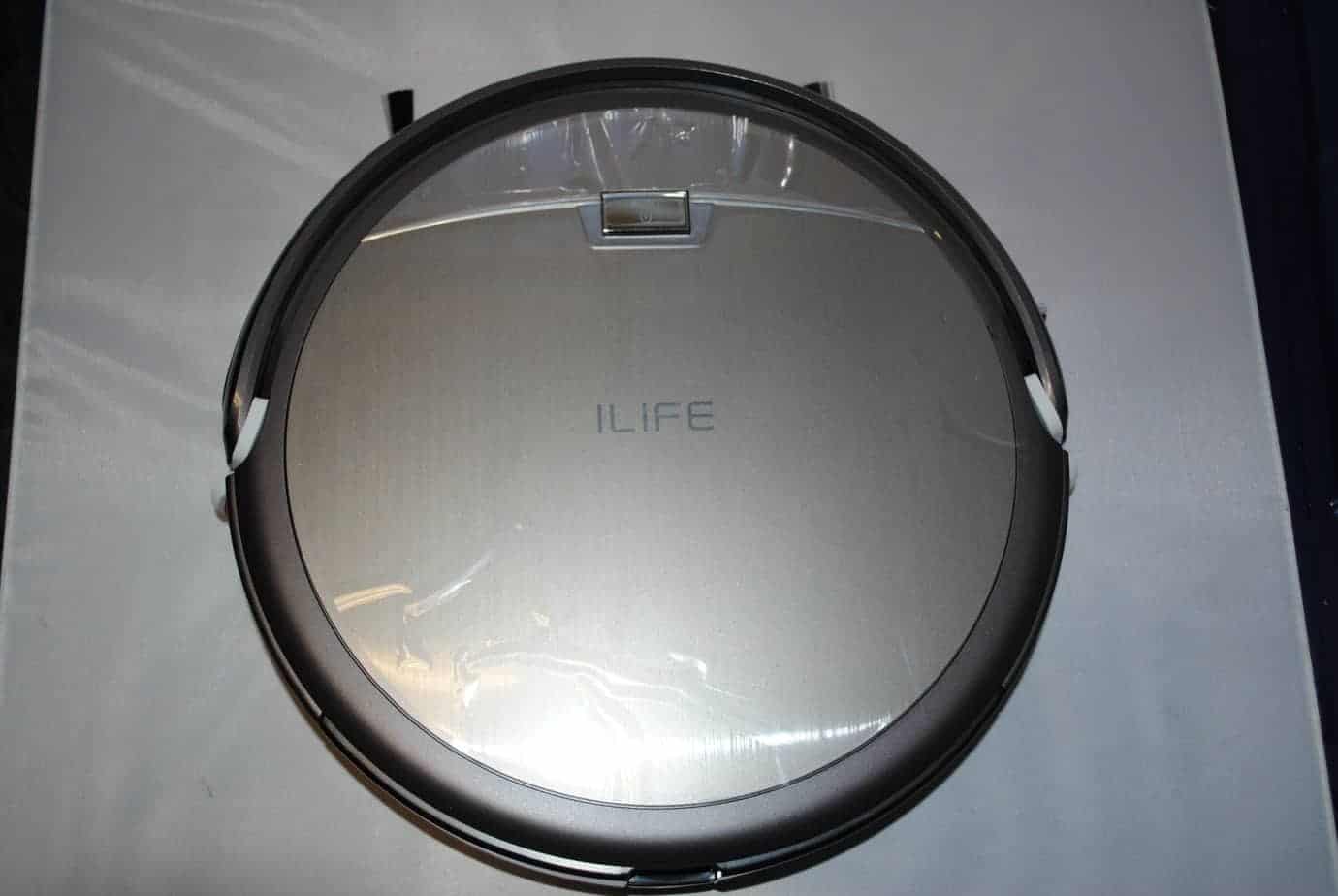 If you are looking for something that you can leave alone to vacuum your house while you are out or at work, then this is the one for you.

It’s affordable, durable, and the sensors are great so you shouldn’t have to worry too much about it getting stuck – mine only did a couple of times.

The cleaning power on all floor types is fantastic, and it is ideal for pet hair, especially dogs who shed a lot of fur.

The canister is a little small, but it is easy to empty, and it doesn’t have Bluetooth features or app connection. However, it is a reliable little machine that comes at a very good price – especially for a robot vacuum.

Made by a trusted brand, it does a good job of sucking up debris and the brush used for hard flooring gives it some extra reach. It’s a good buy that is definitely worth the money.

This robot vacuum cleaner certainly surpassed my expectations – especially because it is a relatively cheap model. I was pleasantly surprised by its performance, and it got on well with my dog.

It was superb at picking up debris and pet hair, although large messes should certainly be avoided.

If you have stairs then you will need a little handheld vacuum in order to get those done, but the rest of the house should be fine with this.

Easy to set up, and with a handy remote that has a range of very helpful controls, it is one that you should certainly be considering, and one that I am glad to have chosen. It has its flaws, but it’s a good machine.